The Exhibits were prepared as the main feature of the Educational Project (2009-2012), funded jointly by the Heritage Lottery Fund and private donations.

Designed by Mick Orr of Bremner & Orr, the Exhibits are aimed at answering the main questions posed by Park visitors of all ages, namely:

When asked to explain the designs, Mick Orr responded:

'For many years the writings and works of Sir John Betjeman have been a frequent companion in my reading and listening.  Thus it was imperative, that when an enquiry with 'Betjeman' in the title came through requesting our design services, to follow it up.  Having previously worked on a number of literary design exhibition projects, involving the works of writers such as Thomas Hardy, William Barnes, Charlotte Bronte, Roald Dahl etc, Bremner and Orr had developed an appetite for such engaging work.
John Betjeman was an engaging person on many levels, not only as a poet and keen observer of life and its foibles, but also as a champion campaigner for conservation.   His fights to save various buildings of quality and unique townscapes against the onslaught of unthinking development appealed to me as a designer.'

In addition, the Educational Project called for the design of spaces in which the Exhibits would be sited for use and pleasure by teachers, students, residents and casual visitors.  To that end the Park Trustees, Mick Orr, local builders and volunteers worked together to achieve three special spaces, in which informal seating is provided.  Again Sarsen Stones, supplied by a local farmer, were used. 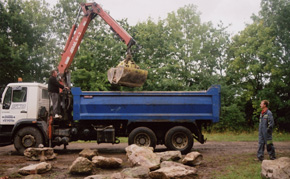 The Park provides an ideal setting for exhibits about JB, for as Mick Orr remarked:

'Above all, John Betjeman was a romantic.  He would, I am sure, have giggled and felt great joy in seeing this special piece of ground saved from over-development and transformed:  the children playing, the duck and flowers flourishing and  especially  the young holding hands in the Park named in his honour.'

I like the way these old brick garden walls
Unevenly run down to Letcombe Brook.
I like the mist of green about the elms
In earliest leaf-time. More intensely green
The duck-weed undulates; a mud-grey trout
Hovers and darts away at my approach.