A Sense of Place Exhibit

When asked about these this Exhibit, Mick Orr responded with the following explanation:
'The main focus of these Panels is on Sir John's legacy and the inspiration to be drawn from his insights into the value of unique and special places, buildings .
These range from Wantage locally to St Pancras Station in London on a national scale.'
Mick Orr, in concluding this explanation of the designs, expressed two hopes for the Exhibits: ' first, that they will encourage curiosity to learn more about such a fascinating man; secondly, that they will help to recruit a continuing body of volunteers eager to care for this lovely Park.'

Before unveiling this Exhibit, Professor Brian Catling read the follwing two poems which he had specially written for the event. 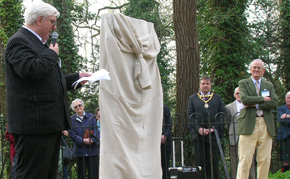 Prof Brian Catling reading two of his poems, specially written for the event, before unveiling the third Exhibit
© Lewis Humm

It only takes one
For a garden to make.
To seed care in Amnesia
Upturning the brief ugliness of abuse in a templed ground.
Preening out the broken furnishings called neglect
And weeding the blindness from poor eyes
That would squander sight
& their lives
While unpassing
Here
It takes more than one to see it
And call.
Pollinating by tongue
All the other senses
To swarm.
Because it is in exchange
That we the visible ones
Called human
(Unlike kinder beasts)
Do irrigate and tend
It cannot be taken back
This husbandry that did the sad road unmake,
The carved psalms and planted portraits
Bolt all ruin down.
The undergrowth knows it now
As does the unstained soil and the stretching tree.
Passer-by take care
You may become unwritten here
Waylaid by brightening hope and its dapple
Of an unexpected day. 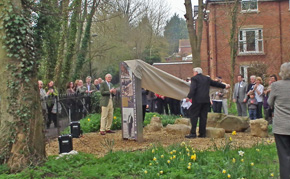 Early on old Wheeler's ground,
In the last years, when wise apples
Notwithstanding fell
We might see him
In a lost loose summer
Wipe his brow
Or when the brook is frozen
Tighten a scarf,
But still stop
To wonder at its sound
Locked under
The frosted sun.
Before the sight soured
His homecoming stroll
On a constant rope of birdsong
Tight betwixt fast water
Feeding the wild calligraphy
Of plants
&
Oafish tippings
That spilt
The tender balance
In quandary
To blinker
Most eyes away
BUT
Nothing escapes him
And all demands.
Seeking the rooted heart
To grow a bough into a branch and then to twig
Where it defines
Split to nib
Scrawling in anger
A healing charm.
That NOW is worked.
Today as we unhook our company beneath these trees
And drift back into the tighter kindling of home
We know that something remains to smoulder
Where the words were shed and a memory
Of a man unmet was conjured
In previousness.
He is there now
Dwelling in the focus less hollow
Between the leaves.
Sharing their startled protection
For a cherished
Length of time.
These and the earlier poems were enthusiastically received at the event, stimulating such written comments as follow:
'There were cameo roles, but on the day the star performer was surely Professor Catling.  What a masterstroke to have brought him in to 'bat for you'.  His use of language, Le mot juste, the rising and falling of his voice, his spirit and integrity and generosity to the Park, the Poet and the occasion, were sensational.  I am sure I was not alone in listening spellbound.'

I like the way these old brick garden walls
Unevenly run down to Letcombe Brook.
I like the mist of green about the elms
In earliest leaf-time. More intensely green
The duck-weed undulates; a mud-grey trout
Hovers and darts away at my approach.