The event took place on a gloriously sunny Spring day.  Over 200 guests and visitors attended.  They came to hear the words of the three 'Unveilers' and to see the long-awaited Exhibits. 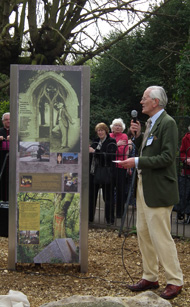 The Trust Chairman thanking all of the many people who have contributed to the Educational Project.
© Lewis Humm

Five people were thanked by the Chairman of the Trust, Ralph Cobham, for their contributions respectively to the Park and to the event.

First, there were the two designers responsible for ensuring that the essence of the two celebratory themes of the Park  the start of the third Millennium and the life of former Poet Laureate and former resident of Wantage, Sir John Betjeman  has been captured and presented for residents and visitors to enjoy.  Respectively they were Alec Peever and Mick Orr.  The former, as a nationally well-known stone sculptor, was responsible for inscribing the six poetry plaques with excerpts from Sir John's works.  In turn Mick Orr, a nationally acclaimed Museum and Interpretive Display designer, had created the three Exhibits.  The latter sensitively provide insights into the complexity of JB's life by reflecting the diversely humerous, compassionate and religious dimensions of his writing. 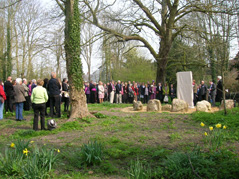 The unveiling was performed by Brian Catling, the Professor of Sculpture and Fine Art at The Ruskin School of Art, Oxford, by the Rt Hon Ed Vaizey MP for Wantage and Minister for Culture and by Mr Keith Halstead, Committee Member of the Heritage Lottery Fund (HLF).

The background to the Educational Project, for which the Exhibits form an integral part, having been explained, Professor Catling was invited to preside over the event.  He chose to make his contributions primarily in verse, explaining that from boyhood he had read the words of JB.   This had led him to try to write his way into the Park and Sir John's understanding.  Altogether, the Professor specially wrote four pieces of prose and poetry for the event.  These, along with pictures of the Unveilings, respectively accompany the sections of the website where the Exhibits are presented.

Now with the bells through the apple bloom
Sunday-ly sounding
And the prayers of the nuns in their chapel gloom
Us all surrounding
Where the brook flows
Brick walls of rose
Send on the motionless meadow the bell notes rebounding.