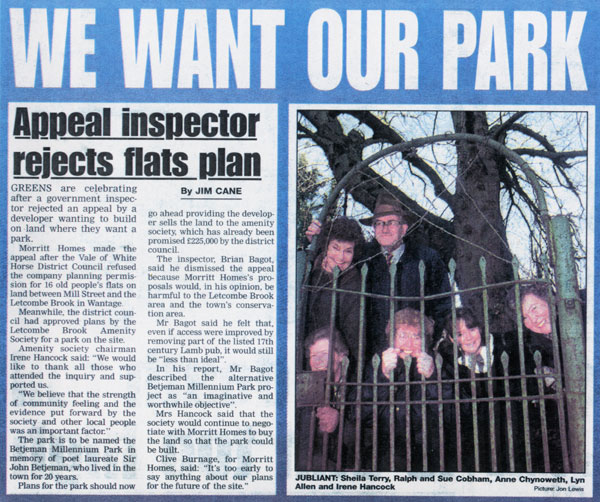 "Lists of the 'Players for the Park' are provided below."

Representatives of the Letcombe Brook Amenity Society, who presented evidence at the Public Inquiry Appeal in 1996:

Trustees & Officers during the Establishment and Development Phases.

Since the trust was established many professional advisers have contributed both to its formation and operation. Principal sources of such services, for which is very grateful, included:

Considerable financial assistance has been provided from several grant-aiding organisations the main ones being:

Several contractors and suppliers, both firms and free-lance individuals, have assisted the Trust with construction and on-going maintenance operations.  They have included the following:

In Collecting and preparing the exhibits website for educational project grant-aided by hlf, trust gratefully received help from members of a specialist working party, whom were:

The Educational Project involves the participation of 13 local Primary Schools, as well as King Alfred's Specialist Sports College.  The contributions of several members of KA's staff is greatly appreciated by the Trustees. Those members, who have been particularly involved to-date, include:

Over the years numerous people  on addition to the Trustees and members of their families have volunteered to help with the formation and upkeep of the Park.  Unfortunately a record does not exist of all those people who have kindly contributed muscle-power, plants, support, refreshments etc.  A partial list is presented below and pictures of some volunteers feature in the Exhibits.

A major effort has been made to include the names of all of the organisations and individuals, who have contributed to the establishment, use, management and maintenance of the Park.  The Trustees apologise of any omissions and ask them to be brought to their attention.

Finally, the Trustees wish to thank all those many people, who have made donations to the Park.  A list of donors is currently being prepared.  In due course it will be displayed in The Vale and Downland Museum.